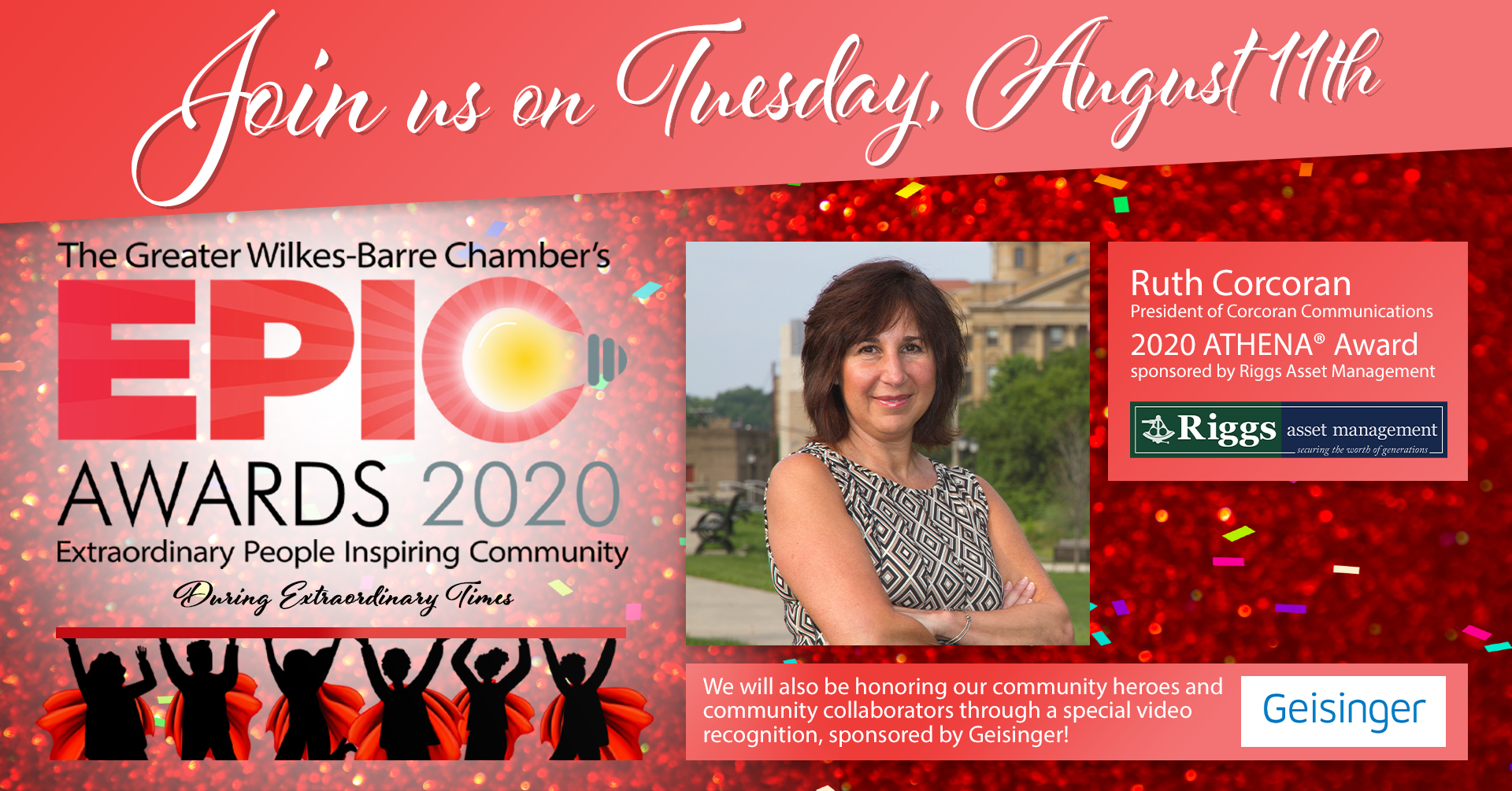 The ATHENA® Leadership Award was inspired by the goddess of Greek mythology, known for her strength, courage, wisdom, and enlightenment. Our 2020 Athena award recipient embodies all of these qualities and so much more. She is an outstanding female business owner, entrepreneur, community advocate, and mentor. Let's meet our 2020 ATHENA® Award recipient, Ruth Corcoran.

In 2000, Ruth Corcoran started Corcoran Communications, a PR & Marketing Firm that is now celebrating 20 years in business. The firm provides PR, digital marketing, graphic design and web services to many businesses in Pennsylvania, New York and New Jersey. Ruth’s diversity of clients has provided her with unique experiences to showcase her marketing skills.  Some of her most memorable include guerrilla marketing efforts on behalf of General Motors, working on a movie set in the mid-West for SenArt Films, planning media events to mark the final days of elephant appearances in the Ringling Bros. and Barnum & Bailey Circus, and publicizing the magic of Disney on Ice.

In 2007, Ruth decided to venture into a new business opening Cork Bar & Restaurant, a popular eatery that earned the number one spot on Trip Advisor and won many local reader’s choice awards. She successfully operated Cork for ten years before selling in 2017. In 2015, Corcoran opened her third business, COR Strategic Group, to focus on marketing for credit unions. COR was eventually merged into Corcoran Communications and her son Greg joined the company to oversee digital marketing.

Articles written by Ruth on behalf of clients have appeared in many local and national publications. She has generated publicity for clients via press releases that appeared in outlets including The Washington Post, Wall Street Journal, New York Times, USA Today, CNN, Tokyo TV and MSNBC, among others. In 2009, she joined her son who was enlisted in the Navy, for 8 days at sea aboard the Navy’s guided missile cruiser The USS Chancellorsville. One of her most cherished experiences, a journal of her time spent aboard the ship were published in both military and local publications.

Ruth has earned many honors, including NEPA Top 20 Under 40, NEPA Woman Entrepreneur of the Year, Best 50 Women in Pennsylvania Business, Greater Wilkes-Barre Chamber Small Business of the Year and an Enterprising Women Magazine award. She has also won Gold & Silver Addy Awards.

She has donated much of her time to local non-profit community organizations, including the Wyoming Valley Children’s Association (WVCA), Catholic Youth Center (CYC), Commission for Economic Opportunity (CEO), Osterhout Library, Wilkes-Barre YMCA, Junior League, SPCA and Leadership Wilkes-Barre. Ruth is also active on many non-profit boards and is a member of Circle 200, the Greater Wilkes-Barre Chamber and POWER. Always up for a challenge in her efforts to support the local community, in 2016, Ruth rappelled down a 14-story building in Scranton to raise funds for NeighborWorks NEPA. In 2017, she stepped way out of her comfort zone to perform at Dancing with the Wilkes-Barre Stars to raise money for KISS Theatre. While she owned Cork, she began the “Dog Days of Summer” fundraiser to benefit the SPCA, raising tens of thousands of dollars through the years. Supporting rescues has always been close to her heart. She is a proud mama to her pups Maddie from Blue Chip Farms Rescue and Dixie from NEPA Pet Fund & Rescue. Her biggest puppy love was Snickers, a rescue from the SPCA who was with her for 14 wonderful years.

Ruth resides in Bear Creek Township with her husband Bill, the owner of Corcoran Printing, a 4th generation family business. The couple has four children. She is most proud of the wonderful, caring adults her children have become. Greg lives in Philadelphia, Katie in Sacramento, CA, Kristen in Bethlehem and Bill Jr. in Mountaintop. Ruth enjoys travel, hiking, reading and spending time with family and friends.

We are so excited to honor Ruth at the 2020 EPIC Awards. Don't forget to tune in on Tuesday, August 11th at 7 PM. Watch the livestream by following our Facebook page HERE, or by registering to receive a private viewing link HERE!