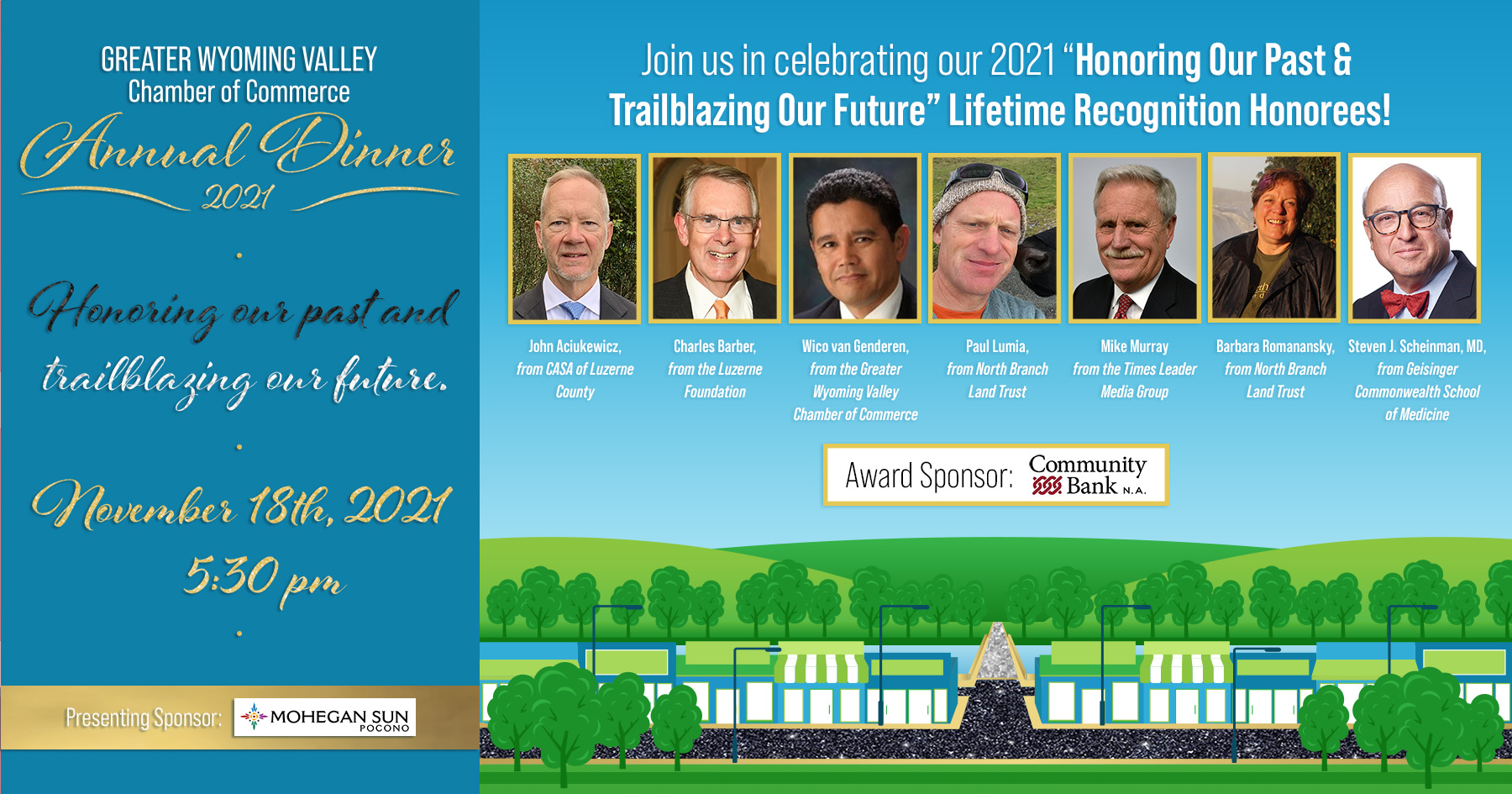 By Greater Wilkes-Barre Chamber of Business and Industry
11/16/2021
These awards have been introduced in 2021 to recognize individuals who have made a lasting contribution to our region through their years of leadership, inspiration, and positive influence in the business community and to our community at large. Our 2021 honorees include John Aciukewicz, from CASA of Luzerne County; Charles Barber, from the Luzerne Foundation; Wico van Genderen, from the Greater Wyoming Valley Chamber of Commerce; Paul Lumia & Barbara Romanansky, from North Branch Land Trust; Mike Murray, from the Times Leader Media Group; and Steven J. Scheinman, MD, from Geisinger Commonwealth School of Medicine.

John Aciukewicz, from CASA of Luzerne County
John's involvement with CASA of Luzerne County began ten years ago as a member of the steering committee to establish CASA in our community. He served as the President of its Board of Directors from 2013 until June 2016. In October 2016, when he was hired as the Executive Director, and has since stepped down from that position on September 30, 2021. John remains involved with CASA on a state-wide level, serving on the PA CASA Board of Directors. PA CASA provides training and support to existing CASA programs as well as developing new local CASA programs. In addition, John is completing his three year term as a member of Pennsylvania's Citizen Review Panel (Northeast Region) which seeks to identify resources and strategies to improve the Commonwealth's child welfare system. Currently, he serves on the Bio-Medical Ethics Committee for Commonwealth Hospital in Wilkes-Barre. Additionally, he is on the Advisory Council for Mercy Services led by Sr. Lucille Brislin, RSM, in Wilkes-Barre, which provides a network of support for those experiencing economic hardship. Previously, he was a board member for the Mercy Consultation Services in Dallas and is a graduate of the Leadership Wilkes-Barre (now known as Leadership Northeast) program. He graduated from Gettysburg College and the Dickinson School of Law. John maintained a law practice in Luzerne County for thirty-two years before becoming the Executive Director for CASA of Luzerne County. His wife, Beth, and he reside in Trucksville. They have three adult sons and four grandchildren.

Charles Barber, from the Luzerne Foundation
Growing up outside of Pittsburgh, PA as the youngest of six children, Charles Barber learned at an early age the importance of community participation and giving back.  He is passionate about making a difference in our community. His vision, love for people, and willingness to “go the extra mile,” has resulted in extraordinary growth at The Luzerne Foundation while hundreds of area nonprofits have benefited from his expertise and encouragement. Throughout his career, he was actively involved in nearly all aspects of community development and service including mentorship and Board Membership for NCAC, Kiwanis Club of Wilkes-Barre, Family Service Association, Diamond City Partnership, Wiltsie Performing Arts Center and Community Foundations of Pennsylvania, to name just a few.  He was integral in the establishment of the Disaster Recovery Coalition of Luzerne County following devastating flooding in our community in September, 2011, and is working with several agencies involved in the Anti-Bullying Coalition and Suicide Prevention.  As a member of the Kiwanis Club of Wilkes-Barre, Charles spread Holiday cheer as he played Santa Claus to hundreds of senior citizens and children of all ages, and especially the Aktion Club whose members are special needs, mentally or physically disabled adults.

During Charles’ 21 years of service, The Foundation grew to manage more than 350 funds of all types and distributed more than $150 million dollars in grants. In 2013 he Co-Founded “YAC,” the Youth Advisory Committee of The Luzerne Foundation.  YAC teaches high school students the principles and practice of responsible philanthropy. Even during tough economic times, the continued generosity of donors has made our community a better place to live, work, and play. Prior to leading The Luzerne Foundation, Charles spent 20-plus years in financial services management with a concentration in charitable fund services, including eight years with the Calvert Social Investment Fund which was one of the first mutual funds specializing in ESG, Environmental, Social, and Governance factors to evaluate companies and countries on how far advanced they are with sustainability.  Charles graduated from George Washington University with a B.S. in Physics and The University of Pittsburgh, Katz School of Business Administration with an MBA. He is a graduate of the Cannon Financial Institute—Foundation Management School and has taken numerous professional development courses through the Council on Foundations such as Non-profit Management, Administration, Grant Making, Development & Programs. He and his wife, Denny are the proud parents of two grown sons.   He is a handyman extraordinaire and enjoys tinkering on any variety of projects.

Wico van Genderen, from the Greater Wyoming Valley Chamber of Commerce
Wico joined the Chamber in 2014, when the Chamber conducted a nationwide search to engage a leader to transform the Chamber and help revitalize the Valley. He brought with him over 30 years of world wide- corporate experience including Chief Operating Officer, Managing Director for Asia Pacific, Group Leader for North American Operations, and Corporate Head of Global Marketing and Product Management in leadership roles at Diebold, IBM, Norton Corporation and Interbold. During his tenure at the Chamber, Wico led the transformational effort to revitalize and rebrand the Chamber, driving operational, financial, and organizational excellence with a focus on retention and attraction of businesses, workforce, and economic impact.

Paul Lumia, from North Branch Land Trust
Paul is a life-long resident of Northeastern Pennsylvania growing up in Bear Creek Village and now residing in the Back Mountain with his wife Colleen. He is a graduate of Lehigh University and the University of Pennsylvania. Paul was a North Branch Land Trust (NBLT) Board member in the mid 1990’s and assumed the role of Executive Director in 2008. Before joining NBLT, Paul served in the United States Army and Pennsylvania National Guard as a field artillery officer and worked in the financial and manufacturing sectors. Under his direction, NBLT has conserved more than 23,000 acres of land in Northeastern Pennsylvania. He has built community awareness for the organization through education and outreach programming, as well as addressing the conservation needs of both municipal and private landowners.

Barbara Romanansky, from North Branch Land Trust
Barbara Romanansky, served as the Director of Development for 12 years at North Branch Land Trust. She joined the NBLT in 2008 and she has the distinction of retiring as the organization’s first Director of Development. Barb is recognized regionally in the nonprofit network for her deep passion for protecting the beauty of nature and all that it offers. Her enthusiasm and willingness to take on new challenges proved instrumental in engaging donors and friends of land conservation far and wide. She is also credited with substantially growing the donor base and building long-term relationships with many members of the Northeastern Pennsylvania community. Earlier this year, Barb participated in a collaborative event, helping to coordinate “The Lifeblood of Our Community” event, facilitated by Miller-Keystone Blood Center, along with her friends and colleagues of the American Cancer Society, CASA of Luzerne County, Osterhout Free Library, and Wyoming Valley Children’s Association.

Mike Murray, from the Times Leader Media Group
An Illinois native, Murray began his career with Arlington Heights, Illinois based Paddock Publications in 1969. Over the following seven years he held numerous circulation-focused roles with the organization, from customer service positions up to Circulation Director. From Paddock, Murray moved to Thomson Newspapers Inc., with director positions in Illinois and Michigan. He also spent time in Illinois, Massachusetts as the Corporate Director of Circulation. In 1980, he accepted a position with the Des Moines Register & Tribune Company in Iowa, where his efforts included heading the sales and marketing team that eventually oversaw the merger of the morning and evening newspaper operations. During his tenure in Des Moines, Murray served on several civic organization boards including the Boy Scouts, where he chaired the Iowa State Boy Scout Camporee, a two day event with attendance in excess of 10,000. Four years later, Murray accepted a position that would bring him here to Pennsylvania and the East Coast, where much of his career would be focused.

His job with Connecticut-based Ingersoll Publications brought Murray to Ardmore, Pennsylvania, where he was named Publisher of the ACME Newspaper Group, an award-winning group of weekly and monthly publications in suburban Philadelphia. That role saw Murray heading up the launch of a new Sunday product during a competitive labor dispute. Over the following dozen years, Murray would hold positions with Downingtown-based DFM Associates, as publisher of several business publications; as well as with NJ Publications’ Asbury Park Press in New Jersey. In 1998, Murray joined the Yardley, Pennsylvania-based Journal Register Company. There, he served as Circulation Director for the West Chester Daily Local News and the Delaware County Daily Times. He went on to become Vice President and then Senior Vice President, with oversight of the company’s Philadelphia and New York clusters, including 88 print publications, six electronic editions, and 78 websites. Murray went on to found his own consulting firm, MJ Murray Associates, before heading south in 2011 to work for Irving, Texas-based American Consolidated Media as Vice President of Consumer Services and Publisher of a newspaper group in the Alice, Texas area.

While in Alice, Murray served on the Boards of CASA of Jim Wells County and the Alice Boys and Girls Club. He came back east in 2014 as a Vice President with North Carolina based Civitas Media, which then owned and operated the Times Leader Media Group, of which Murray was named Publisher in 2016. Murray remained at the helm as the Times Leader was sold to North Carolina-based Avant Publications three years later. In addition to his leadership at the paper, Murray was deeply involved in community engagement during his time in Wilkes-Barre, including numerous business and civic associations. He and members of the staff were familiar faces at a range of community events, including parades, concerts, and Murray’s notable appearance in high heels for the annual Paint Pittston Pink breast cancer fundraiser. His board memberships here included CASA of Luzerne County, Greater Wilkes-Barre YMCA, Greater Wyoming Valley Chamber of Commerce, Diamond City Partnership, and Circle Centre for the Arts. He also was an active member of the Downtown Wilkes-Barre Business Association, representing the paper at meetings but also taking a significant interest in efforts to revitalize center city, where the paper’s headquarters are located.

Steven J. Scheinman, MD, from Geisinger Commonwealth School of Medicine
Steven J. Scheinman, M.D. is in his 10th year as President and Dean of Geisinger Commonwealth School of Medicine, where he also serves as EVP and Chief Academic Officer of the Geisinger Health System. Dr. Scheinman is an internist and nephrologist who has earned international prominence for his research into the genetics of inherited kidney diseases and kidney stones. He has received numerous awards for his research and leadership in medical education. Dr. Scheinman is a fellow of the American College of Physicians and of the American Society of Nephrology and was elected to the American Society for Clinical Investigation. Dr. Scheinman is an advocate on healthcare workforce issues and matters affecting medical schools. He was a gubernatorial appointee to the New York State Council on Graduate Medical Education and has served on a number of advisory boards to the Commonwealth of Pennsylvania and national boards related to medical education. He is the current chair of the board of directors for the National Resident Match Program. Dr. Scheinman was formerly dean of medicine and senior VP at Upstate Medical University. He is a graduate of Amherst College and the Yale University School of Medicine. He completed residency training in Internal Medicine at Yale-New Haven Hospital, chief residency at Upstate Medical University and nephrology fellowships at Yale and Upstate.

Make sure to join us for our Chamber Annual Dinner on November 18th to celebrate our honorees that night! Click here to register today!