Meet the 2020 Volunteer of the Year: Lissa Bryan-Smith 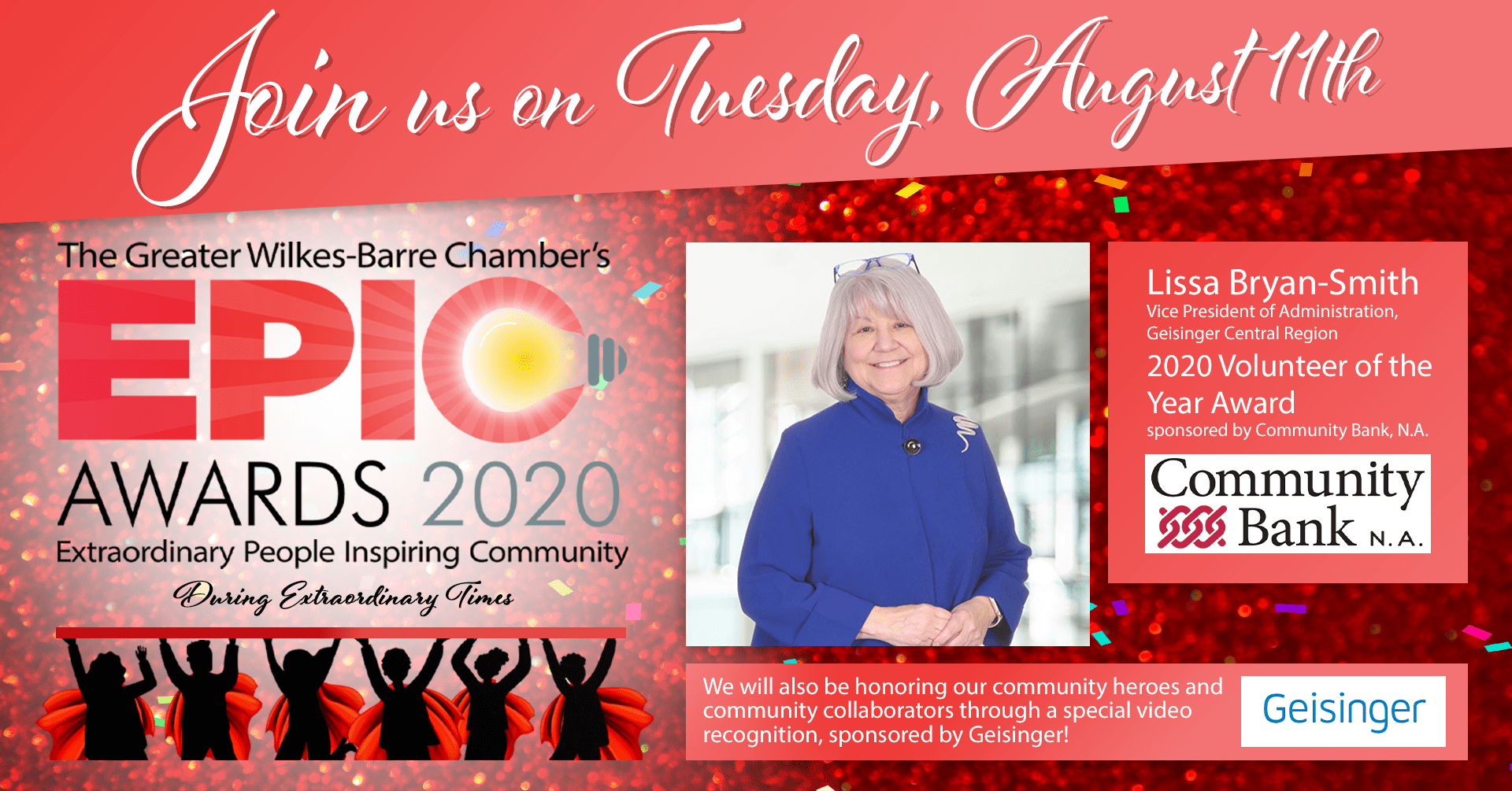 Meet the 2020 Volunteer of the Year: Lissa Bryan-Smith

By Greater Wilkes-Barre Chamber of Business and Industry
7/29/2020
Our 2020 Volunteer of the Year Award goes to an amazing individual who has truly set the bar for what it means to selflessly step up for others, our local non-profits, and our community. Her impact on Northeastern PA is one that is immeasurable. Let's meet our 2020 Volunteer of the Year, Lissa Bryan-Smith.

Lissa started her Geisinger career in 1981 as a staff RN at the Geisinger Medical Center in Danville and is currently the Vice President, Administration at Geisinger-Bloomsburg Hospital and Woodbine Campuses.  Lissa has been a preceptor in the Geisinger Administrative Fellowship program since the revival of the program in 2005 and has had the honor to directly mentor 12 fellows.  She has worn many hats at Geisinger where she was formerly a Vice President of Medicine, and CAO at both Geisinger Wyoming Valley and Geisinger South Wilkes-Barre.

Lissa is extremely active in both her home and work communities. She serves on the boards of Leadership Wilkes-Barre (Chair) and the Husky Research Board (Bloomsburg University).  She has served as the Campaign Chairperson in of the Wyoming Valley United Way in 2010 and the Columbia County United Way in 2013 and the Smiths continue to support the United Way.  Lissa is a member of Circle 200 and volunteers for fundraisers for the North Branch Land Trust, The Osterhout Library, Wyoming Valley CYC, The Luzerne County Historical Society, and the YMCA.

She has won several awards including the following:  in 2006 she was named one of Northeastern Pennsylvania's "Top 25 Women in Business"; the 2011 Distinguished Alumni Award sponsored by Leadership Wilkes-Barre; and in June, 2012 winning the ATHENA Award for Leadership presented by the Greater Wilkes-Barre Chamber of Business and Industry and her favorite honor - her high school Hall of Fame in 2012.

Lissa and her husband, Richard, are proud to live in the City of Wilkes-Barre where they consider themselves “urban
pioneers”.  In 2016, they renovated their second home in downtown Wilkes-Barre and the newest home they have ever owned – a Tudor Revival built in 1901.

Together they are recognized experts on Holiday antiques, authoring two books on these subjects. They have been featured in several publications and television shows including Martha Stewart Living and HGTV regarding their collections.

Don't forget to tune into our 2020 EPIC Awards on Tuesday, August 11th at 7 PM. Watch the livestream by following our Facebook page HERE, or by registering to receive a private viewing link HERE! 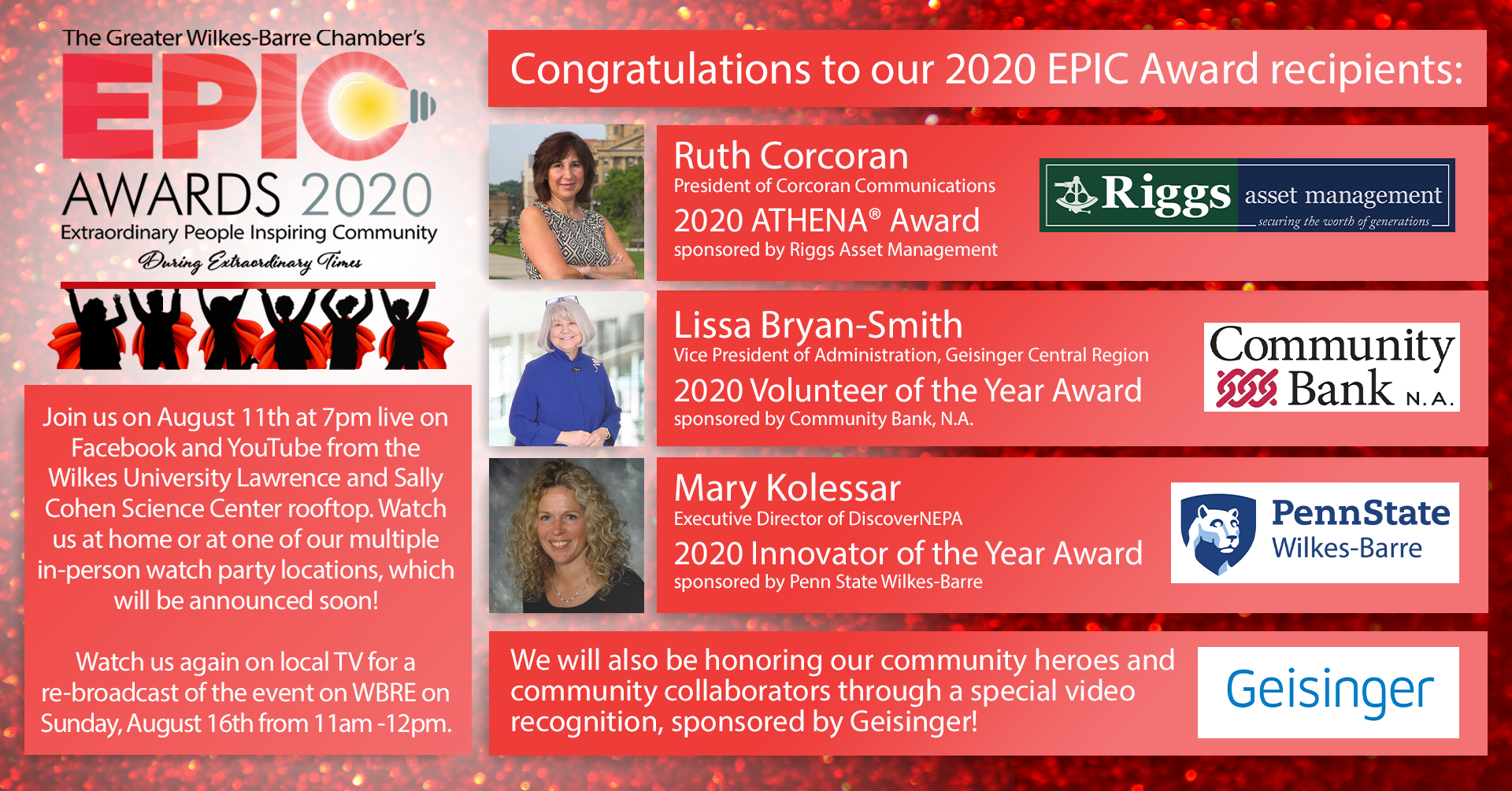