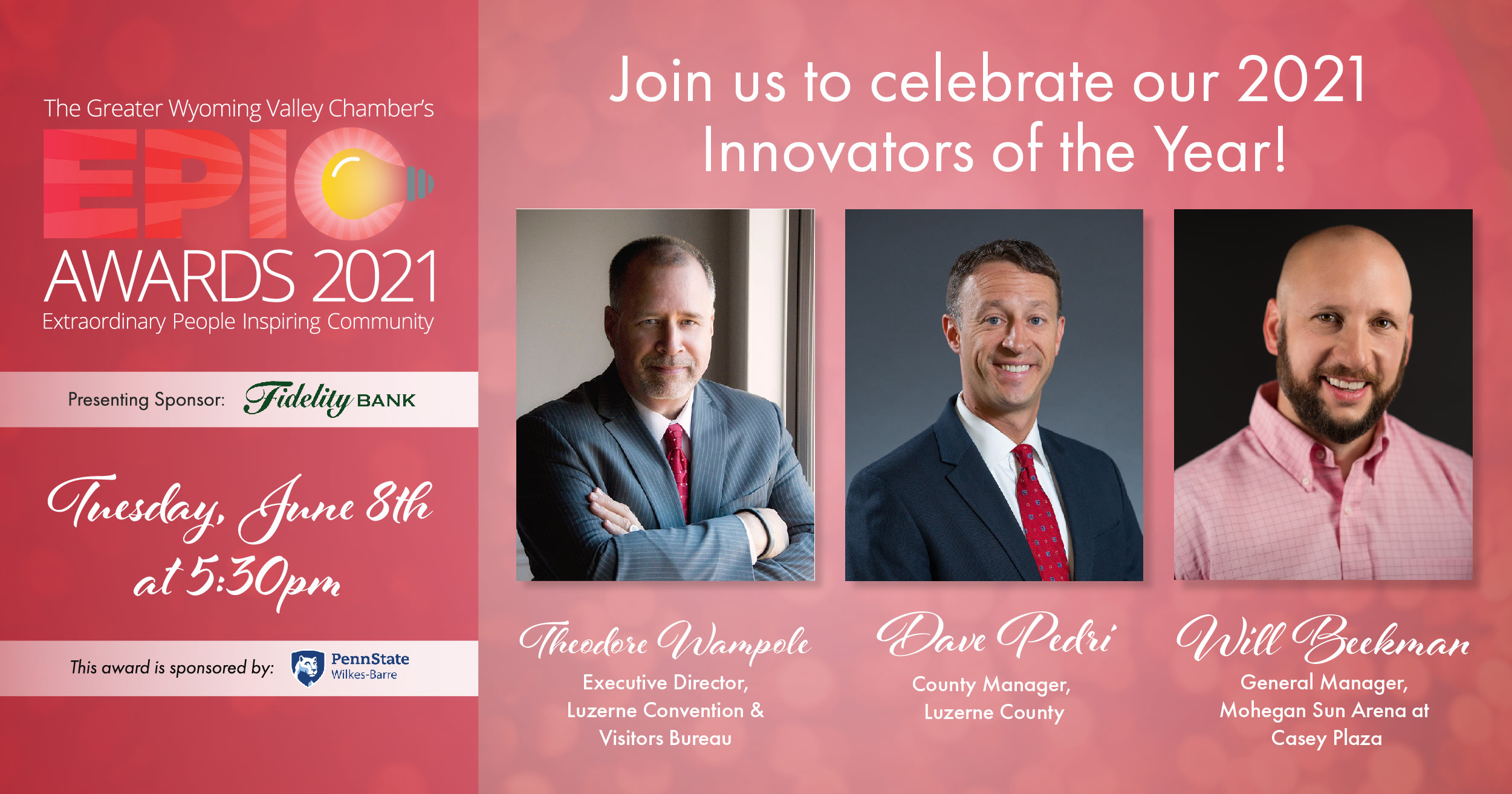 By Greater Wilkes-Barre Chamber of Business and Industry
5/12/2021
Our 2021 Innovator of the Year award goes to three individuals who brought creativity and collaboration to our region through their combined efforts to find innovative ways to bring our community together during the COVID-19 pandemic through the Rockin' the County concert series last year! Let's meet our 2021 Innovator of the Year Recipients, Theodore Wampole, Dave Pedri, and Will Beekman!

Theodore Wampole, Executive Director at Visit Luzerne County
Ted is a lifelong resident of the Wyoming Valley, having lived through the ’72 Flood, graduated from Meyers HS and obtained a BA from King’s College.  After a successfully 32 ½ year career with Liberty Mutual Insurance Group, Ted retired to serve as the City Administrator of the City of Wilkes-Barre for 2 ½ years.  In December 2018, he was hired as the Executive Director of the Luzerne County Convention & Visitors Bureau.

As Executive Director, he organized an “anti-litter initiative” that helped raise awareness of the littering problem throughout our county, and even organized a “design-a-sign” contest in county schools to help promote localized efforts to fight litter. In addition, he helped with the acquisition and distribution of grants for the hospitality industry. His proudest accomplishment is being one of the founders and organizers of the “Rockin’ the River” Summer Concert Series, which last year was modified to “Rockin’ the County”, due to the COVID-19 pandemic.  Ted recently announced his retirement, effective August 1st, after which he and his wife will fulfill their long-time dream and relocate to the southern Outer Banks.

Ted has served his community in many organizations, including the Wilkes-Barre/Scranton BPO Elks, where he served in many officer position, both locally and statewide.  The Elks Lodge named him “Distinguished Citizen of the Year” in 2018.  He has served chairman of the administrative board and trustees of his church.  He was also a Little League coach in North WB for many years, and even served as President.

Ted was the President of the “Killer Bees Athletic Club” for over 25 years, helping to salute and promote amateur athletics in the Wyoming Valley. He is also an active member of the Diamond City Partnership, Downtown Wilkes-Barre Business Association, NEPA Alliance, PA Sports, and the PRLA. As many of his friends can attest, Ted is a diehard New York Mets and Washington Football Team fan.  He is currently a resident of Wyoming, where he resides with his wife, Susan, and has 2 sons – Alex (age 23) and Tedd (age 27).  He also has a stepson, Nick Bair (age 34).

Will Beekman, General Manager of the Mohegan Sun Arena At Casey Plaza
Will Beekman is the General Manager at the ASM Global-managed Mohegan Sun Arena at Casey Plaza in Wilkes-Barre, a position he accepted after serving nearly 10 years as Executive Director at the F.M. Kirby Center.  As both a venue manager and talent buyer, Will lead the Kirby Center to a top-100 ranking among worldwide theaters, and is now continuing that success in the arena format.

In his spare time, Will sits on the Board of Directors for the Greater Wyoming Valley Chamber of Commerce, the American Cancer Society, the Luzerne Foundation, and the Wilkes-Barre YMCA, while also serving on the Penn State Wilkes-Barre Advisory Board.  Will was the recipient of the Greater Wyoming Valley Chamber of Commerce’s 2018 Innovator of the Year Award, and Leadership Wilkes-Barre’s 2019 Distinguished Leadership Award.

An avid baseball fan, Will enjoys watching his beloved Mets and coaching his daughters Little League teams.  He is a two-time graduate of Penn State University (2000, 2002) and currently lives in Duryea with his wife, Katie, and their daughters Hannah, 7, and Allie, 5.

Dave Pedri, County Manager
David is an attorney who was born and raised in Luzerne County.  After graduating from St. Joseph’s University and Law School at Temple University, he accepted a position as a Luzerne County Assistant District Attorney where he worked for 7 years and compiled 13 homicide convictions. In May of 2013, David was appointed as Luzerne County’s first Chief County Solicitor under the new Home Rule Government where he handled all legal matters on behalf of the County.

He was appointed County Manager by the Luzerne County Council in May, 2016 where he now oversees all day-to-day operations of Luzerne County government including the supervision of over 1,400 employees and a $300 Million Budget. David resides in Luzerne County with his wife and family.  He’s a proud member of the Wilkes-Barre Law and Library Association, a graduate of Leadership Wilkes-Barre, sits on the board of the United Way of Wyoming Valley and is a member of the Commonwealth of Pennsylvania’s Local Government Advisory Committee.  He volunteers his time coaching for Valley East Little League and the Greater Hazleton Youth Soccer Association.

Join us for an EPIC night on June 8th to safely celebrate our Innovators and all of our incredible honorees! This year's event, which is presented by Fidelity Bank, will take place at the Mohegan Sun Arena at Casey Plaza, which has 17,000 square feet of socially distant space for attendees to safely enjoy an exciting program, featuring live entertainment during the awards from a variety of local talent. After the program, join us outdoors for even more live entertainment, from Bret Alexander & Friends, refreshments, and activities at our after-party. Limited tickets are available, so reserve your spot today! We also have a virtual ticket option for those who would like to tune into the fun from the comfort of their homes or offices. Click here to register and get more information! 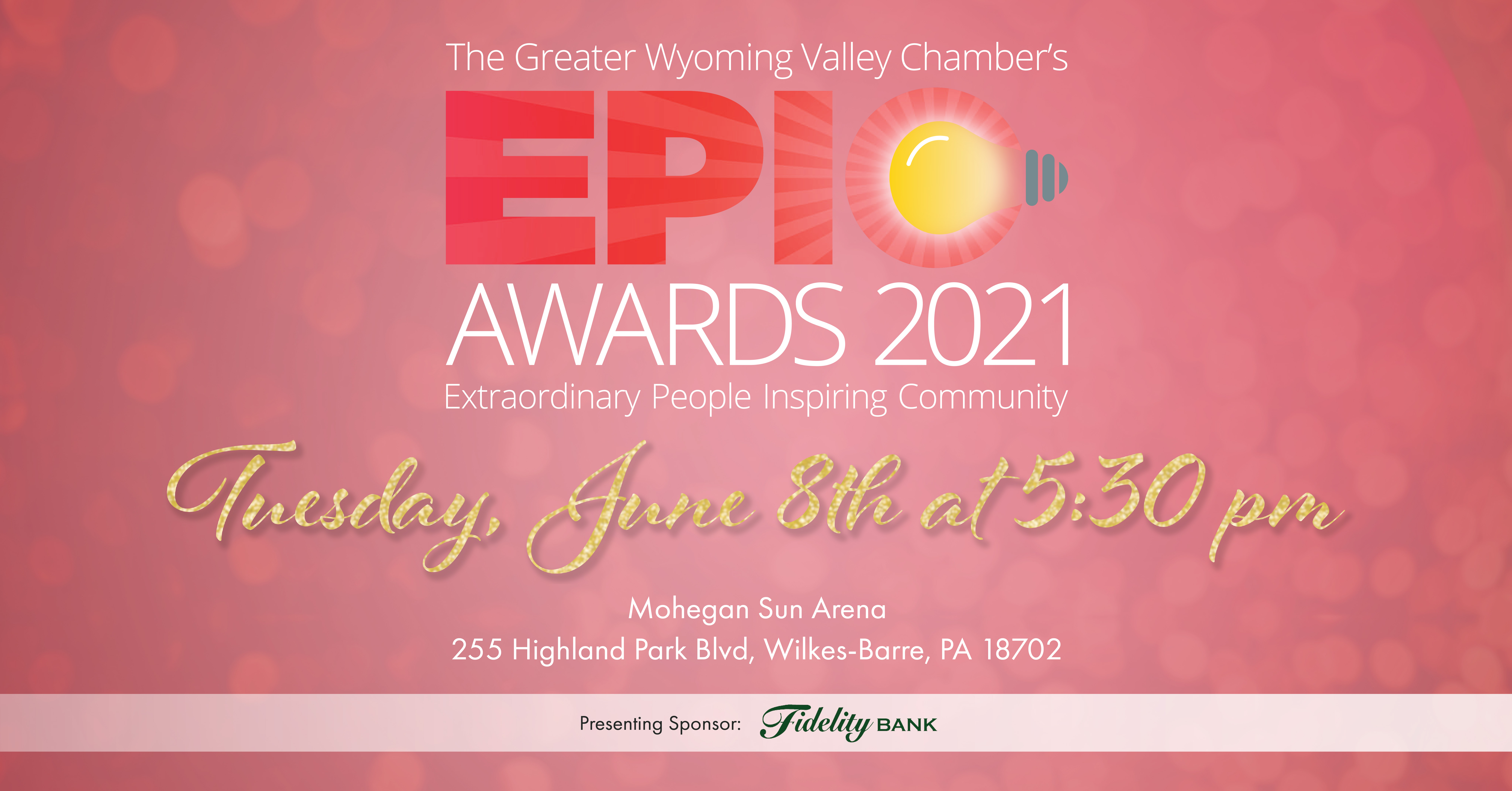