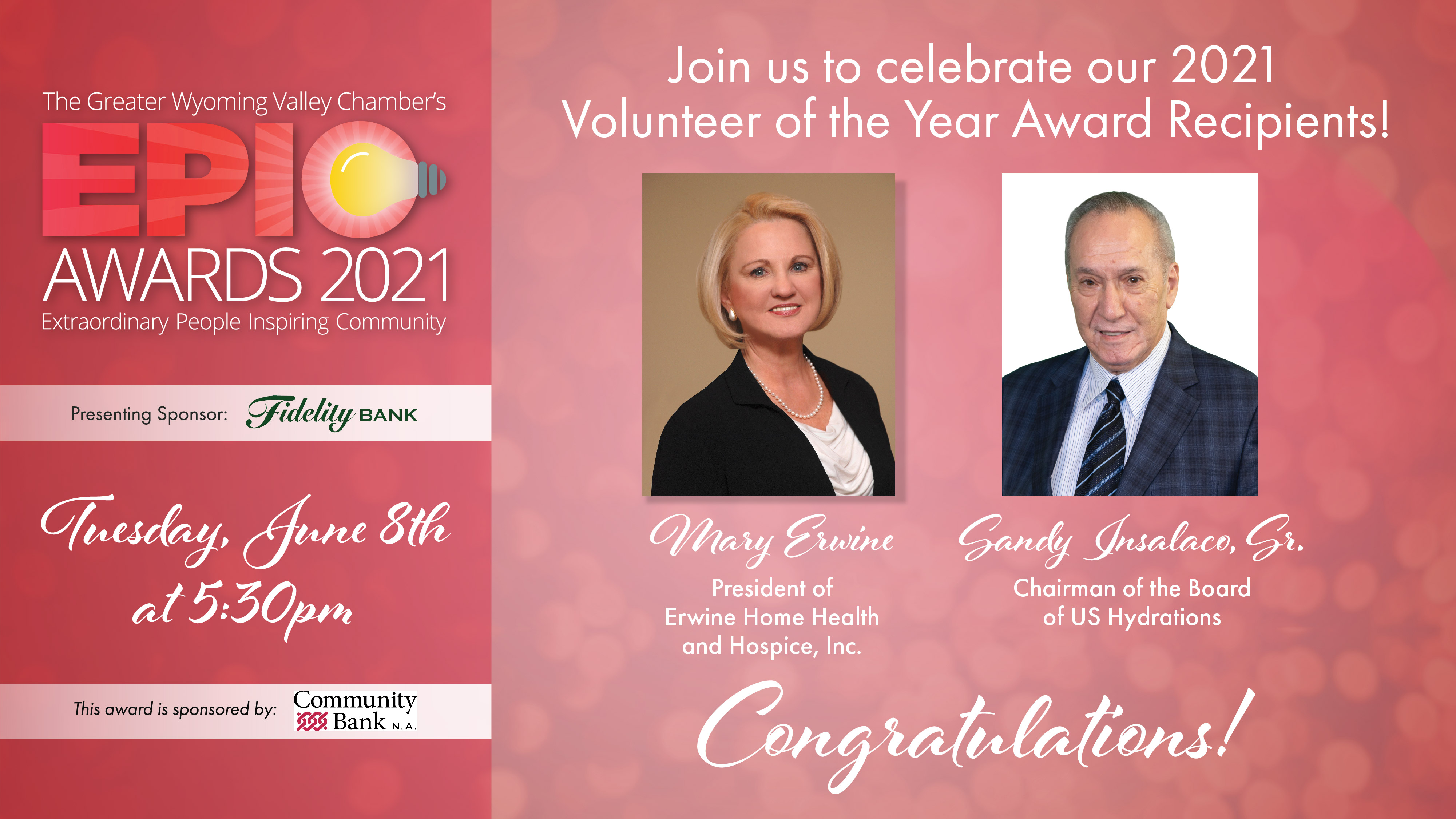 Our 2021 Volunteer of the Year Award will be presented to two amazing individuals who have truly set the bar for what it means to selflessly step-up to lead a critical campaign for Misericordia University, called Now for Tomorrow, which supports a new chapter for advanced teaching, learning, and research for tomorrow’s students and community. Let's meet our 2021 Volunteer of the Year Award recipients: Mary Erwine, President of Erwine Home Health and Hospice, Inc. & Sandy Insalaco, Sr., Chairman of the Board of USHydrations!

In 1993, Mary Erwine set out to create a health care organization that was committed to both state-of-the-art medical technology and compassionate, personalized, care that focused on the needs of each individual.  Erwine Home Care was the first of three of her companies.  The second phase was Erwine Private Duty Healthcare established in 1995 and the third phase was the Hospice division added in 2004.Though her companies now serves ten counties under Mary’s guidance, growing from three employees to one hundred, Erwine Home Health and Hospice and Erwine Private Duty Healthcare has remained true to her original vision and commitment. Mary Erwine continues to meet the needs of patients in Northeastern Pennsylvania as healthcare needs change daily.

From the beginning, Mary wanted to get involved in the community to make it a better place for the present and future generations. She did so by chairing many boards and working tirelessly to improve the community. She holds the following community volunteer positions and is passionate about helping the nonprofits that call our region home.

Mary has also received numerous awards for her service, including the Greater Wyoming Valley Chamber Athena Award in June of 2002, being named Woman of the Year in 2002, receiving the Quality of Life-Advocacy Award from the Eastern PA Chapter-Arthritis Foundation, the Benefactor Award from Northeast Sight Services, the Bold Gold Broadcast and Media Foundation Award, the College Misericordia's Distinguished Career in Nursing Administration Alumni Award, the Arthritis Foundation Community Leaders of the Year Spirit of Business and Industry Award, the Leadership Wilkes-Barre 25th Anniversary Star Award, the Leadership Wilkes-Barre Distinguished Leadership Alumni Award, the Crystal Rose Award from Little Flower Manor and Saint Therese Residence, the Chamber of Commerce – Small Business Award, Pennsylvania’s Best 50 Women in Business for 2007, the Times-Leader Great Women of NEPA in 2010, the Northeast Sight Services Community Partnership Award, and The Salvation Army's “Other’s” Award, which was presented to both Mary and  her husband Allen.

Sandy Insalaco, Sr., Chairman of the Board of US Hydrations
One of the largest players in the premier beverage contract manufacturing business, USHydrations was founded in 1996 as Nature’s Way Purewater Systems which bottled and delivered natural spring water. In 2000, Sandy Insalaco Sr. – who, along with his brothers, at the time, owned a chain of 14 grocery stores– took majority ownership of the company. Sandy’s extensive retail experience provided him with unique consumer insight and vision, prompting him to expand into beverage manufacturing. As demand grew, his business plan did as well. He moved operations to a much larger facility, now over 400,000 square feet, and added advanced equipment and capabilities. He is currently chairman of the board at USHydrations and the company’s primary investor. In addition, he’s a principal in the Insalaco Development Group that develops, owns and operates commercial real estate in Pennsylvania, New York and New Jersey.

His business acumen is in great demand and he therefore serves as Chairman of the Board of Landmark Community Bank, on the board of trustees of Misericordia University and was Chairman of the Affiliated Food Distributors Board, a wholesale cooperative, located in Scranton, PA, serving independent retail supermarkets in New York, New Jersey, and Pennsylvania. He has received many community awards for his service, including the Salvation Army Community Service Award, the Greater Pittston YMCA Community Award, the Monsignor McGowan Cornerstone Award, was honored by the Ethics Institute of NEPA, and was named Outstanding Philanthropist by the Greater Pocono NE Chapter of Fund-Raising Professionals.

Join us for an EPIC night on June 8th to safely celebrate our Volunteers and all of our incredible honorees! This year's event, which is presented by Fidelity Bank, will take place at the Mohegan Sun Arena at Casey Plaza, which has 17,000 square feet of socially distant space for attendees to safely enjoy an exciting program, featuring live entertainment during the awards from a variety of local talent. After the program, join us outdoors for even more live entertainment, from Bret Alexander & Friends, refreshments, and activities at our after-party. Limited tickets are available, so reserve your spot today! We also have a virtual ticket option for those who would like to tune into the fun from the comfort of their homes or offices. Click here to register and get more information! 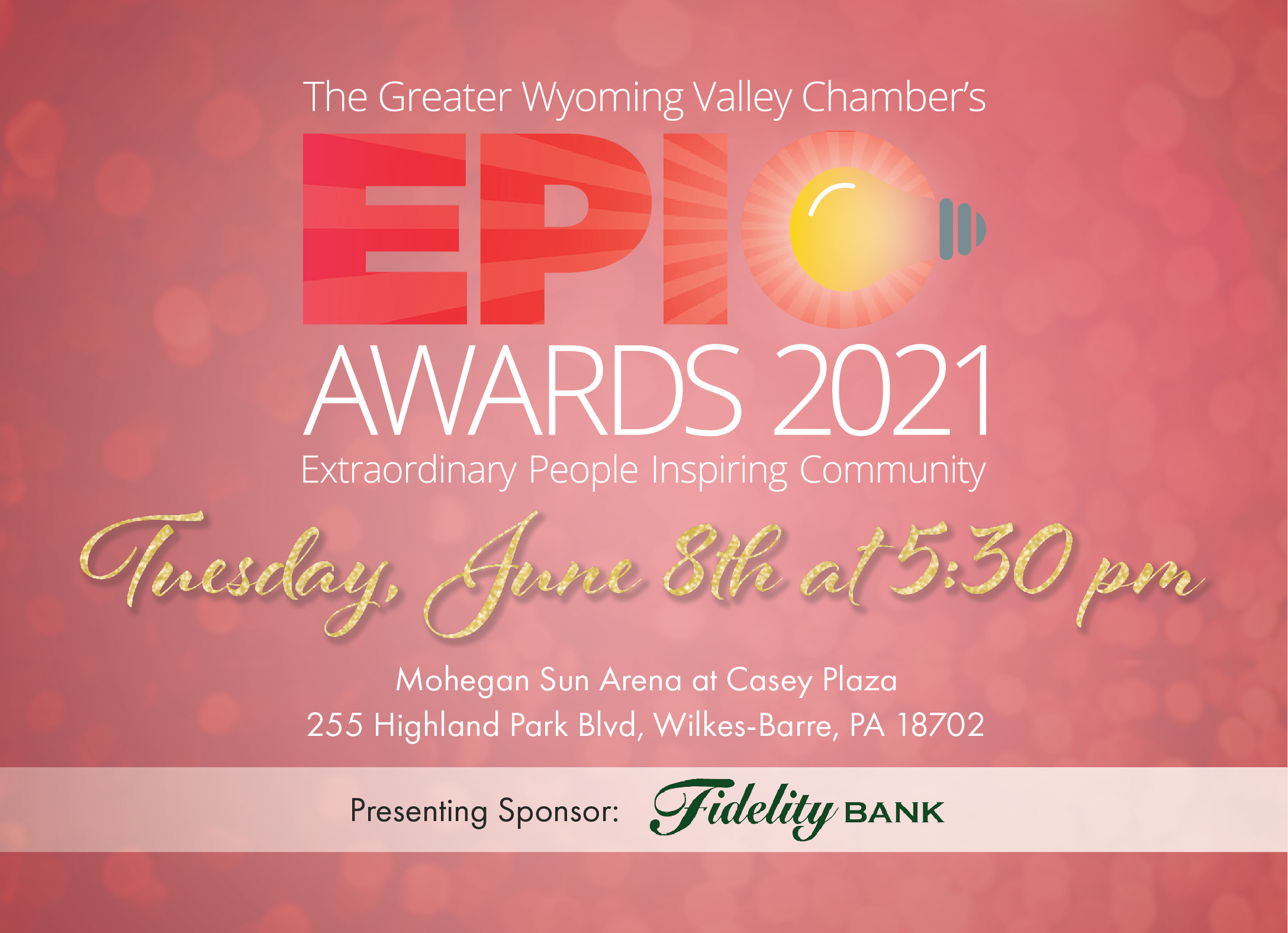