The Internship- Episode 6: The Annual Dinner

The Internship- Episode 6: The Annual Dinner 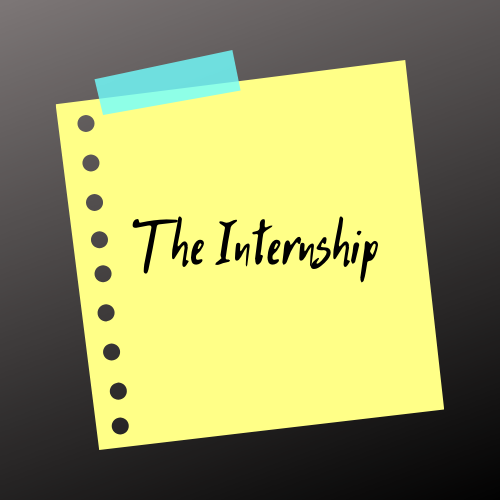 It had all been leading to this. The culmination of ten weeks’ worth of work at the Chamber had led to the final big event that everyone had been waiting for: the Annual Dinner.

The dinner was to begin at 5:30 at the Mohegan Sun Resort and Casino. It was to be a big night and I was nervous about making a fool of myself in front of 600 people from different businesses around Wilkes-Barre. But I stuffed my anxiety down and dressed up in my finest suit and tie. At around five o'clock, I ordered an Uber to make my way over to the resort.

When I arrived I was immediately met by the security of the casino. I told them that I was with the Chamber dinner that was happening, but I could tell they were a bit skeptical. A young guy in his twenties coming to a casino for a dinner? It seemed unlikely. But after showing my driver’s license, they let me pass through. 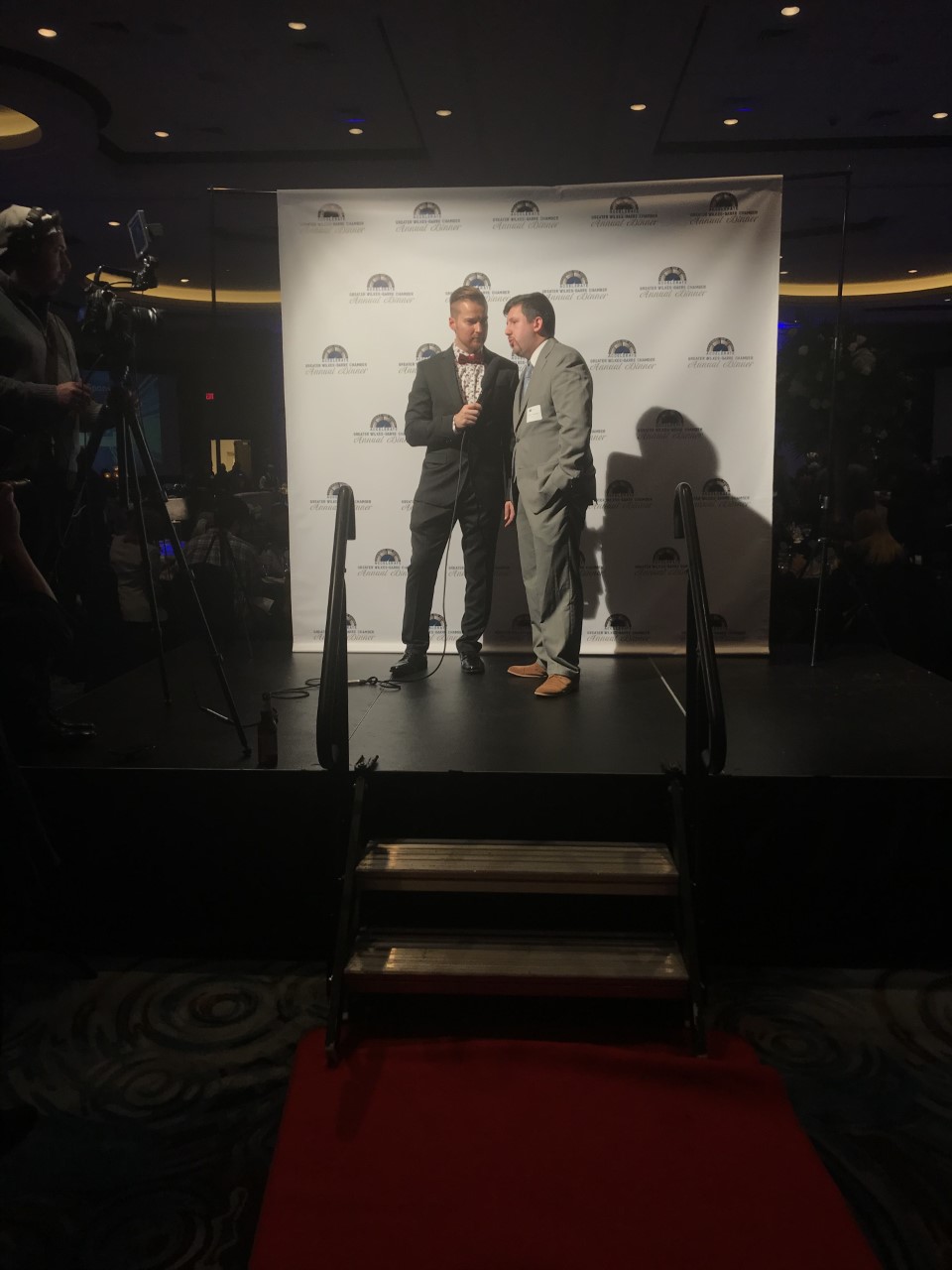 The dinner was being held in one of the conference halls traditionally used for big events like weddings and bar mitzvahs. Tables and sofas were spread out throughout the room to offer businesses and guests places to sit, eat, and converse. To the left was the graffiti wall where guests could take pictures and create their own background with funny add-ons. To the right was a corn-hole game station that had participants play for charity. In the center of the entrance, an artist stood rapidly painting a blank canvas that he would finish with the span of two hours. Buffet and bars lined each wall, bringing in everything from a taco station to a dessert table to a prime meat cutting board where a kitchen staff member would cut off a nice slice of ham or turkey. The room was worth thousands of dollars and numerous wonders to be held. 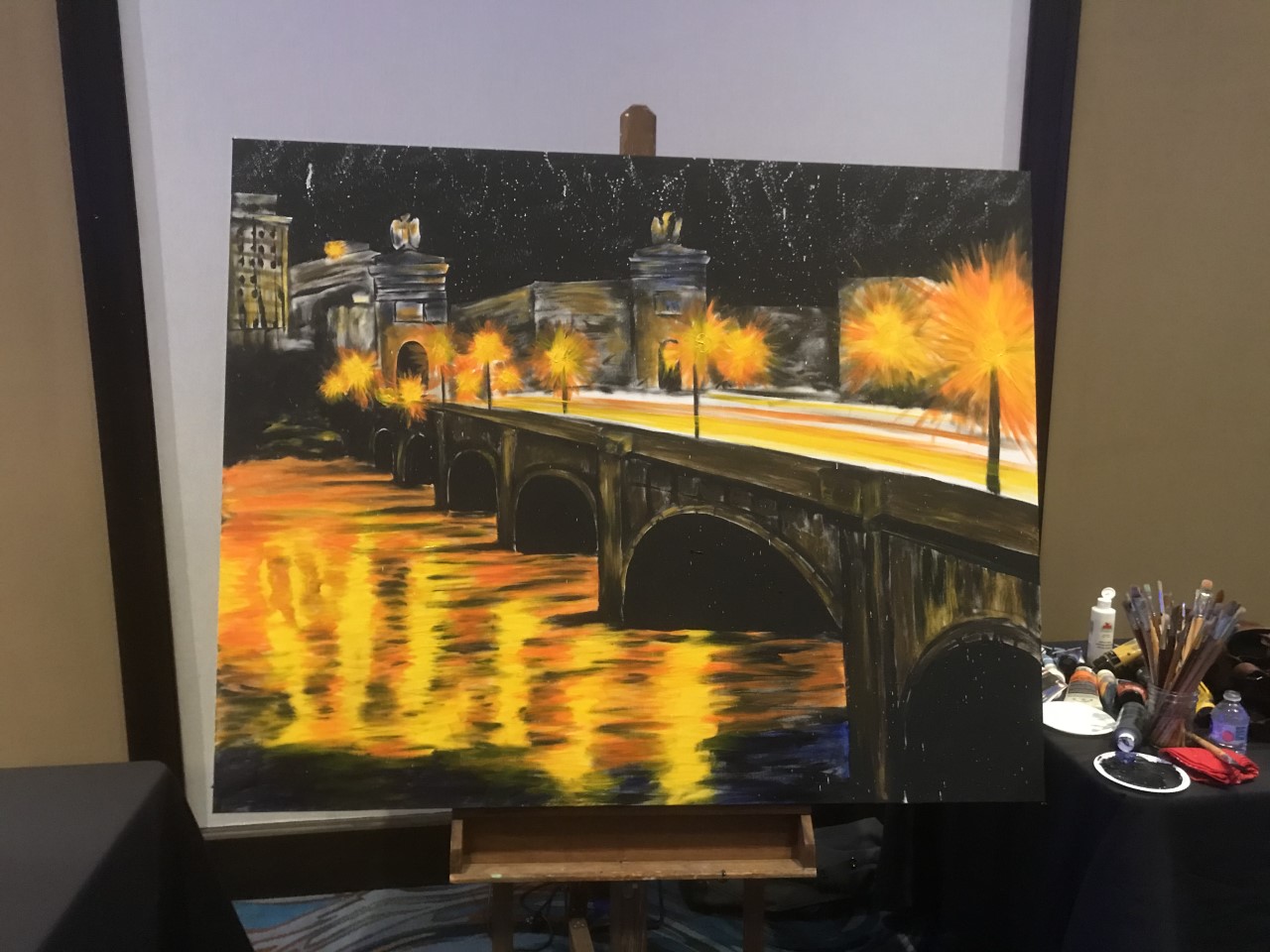 I arrived at the doors and was greeted by Gabby who told me that one of my jobs would be giving guests their name tags for the evening. There were two tables that covered the entire alphabet. I kept myself closer to the A-L table and helped new arrivals with their name tags. As time moved on, I noticed a familiar face in the crowd. I went over to find my former classmate and friend from King’s College, Jill Patton. Jill greeted me and told me that she was a part of the NEPA business that would be receiving an award. I told herof my internship with the Chamber and asked her how things had transpired since her graduation this past May. It was nice to run into an old friend. It truly shows you how you begin to appreciate your friends when you don’t get to see them quite as often.


After handing out most of the name tags, Matt and Lauren told the interns to go inside and enjoy the amenities. The first thing I did was go straight to the food tables. It had been a long day and I had not eaten anything since breakfast. I piled my plate with an assortment of delicacies from every table, trying to digest as much as possible. Suffice to say that was my cheat meal for the week. After eating, I went over to the graffiti wall where I got my picture taken and messed around with the settings. I mingled with Meghan and asked her how she felt to which she replied, “I’m so nervous!” I assured her that she would do a good job when the awards started.


At approximately seven o’clock, all of the Chamber employees (minus the interns) congregated on the main stage and gave their opening remarks. They talked about how the businesses upheld their standards in health, diversity, and leadership and what that did to the Wilkes-Barre community. As the speech went on, it reminded me of how lucky I was to have each Chamber member as a coworker. For the last ten weeks, they had guided me and had given valid thought to my input and opinion. It would only be a few more weeks that I would be employed by the Chamber before I would have to leave. I didn’t want to leave but that wouldn’t be my choice. 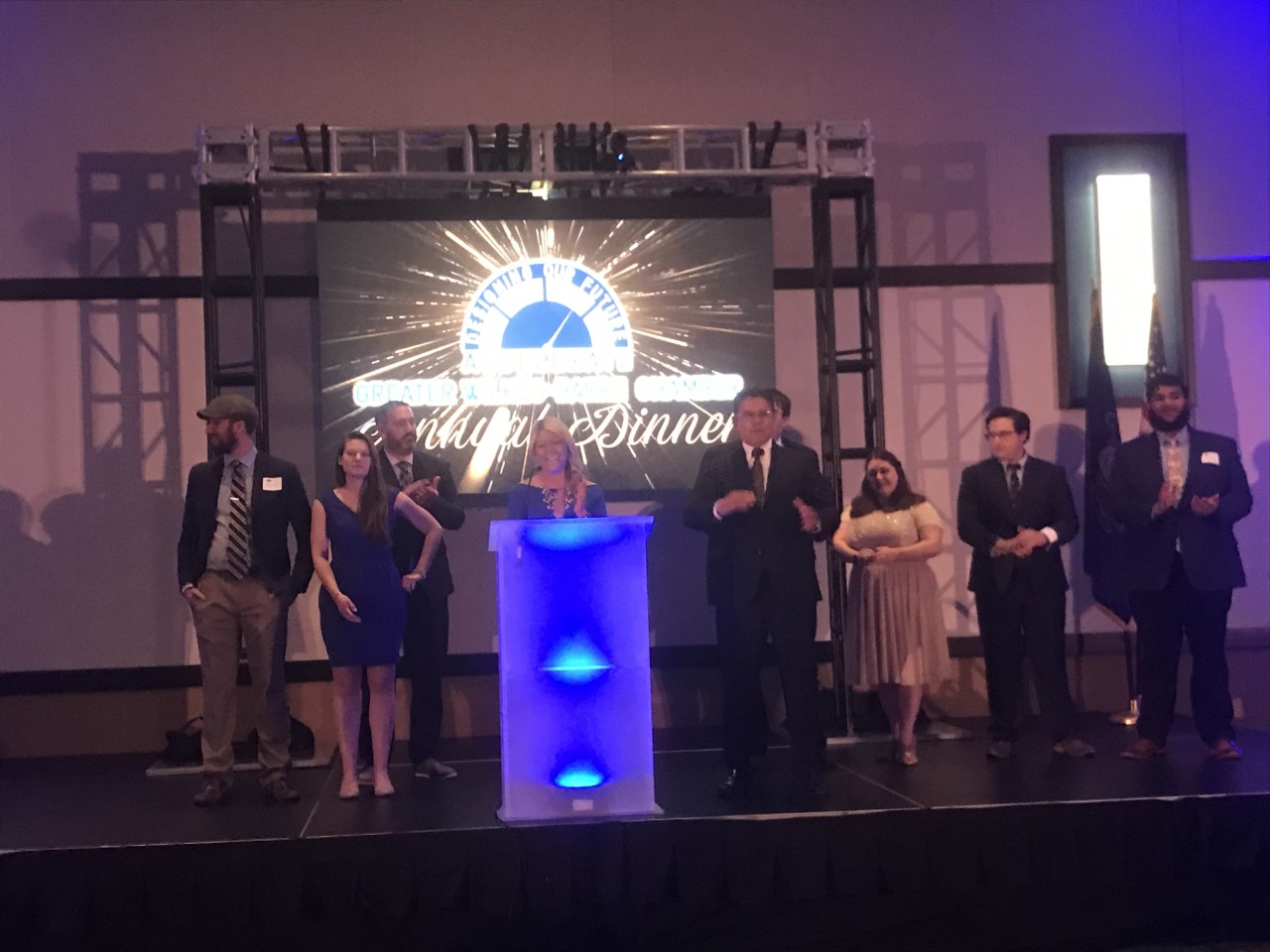 The opening remarks finished and blended into the award ceremony. This was the part I was most excited about. During my internship, one of my tasks was to write a commentary about the company and what would be said when they received their reward. It was thrilling to see my words being spoken by the people giving the awards. It showed that all of my hard work did pay off in the long run. My fellow intern Allison experienced the same rush of excitement when she got to see the PowerPoints that she and Gabby had put together. Nothing made us feel more proud of ourselves at that moment.


Finally, as all the awards and their winners were announced, the final remarks began to ring throughout the hall. Matt instructed the interns to come to the front doors and hand out the Swag bags to each attendee. Matt assured us that no intern had ever succeeded in handing out all the bags at previous dinners. The looks of determination on Gabby and Allison’s faces assured me that we were not going to let that happen.

With each person that passed through our doors, we eagerly shoved a bag in their direction. Most of them were pleased to receive one, while others expressed gratitude but politely declined. Though it took a while, we were able to successfully hand out all the bags.


What a night it had been! We did so much, ate a lot of food, and had tons of fun. The dinner was a remarkable experience to work on and it was a pleasure to have help from my fellow interns. After disassembling some of the equipment, we said farewell to the Chamber and headed home. It had been a long day and we could all use some well-deserved rest.